Evolution – pretty cool agreed? It’s fascinating to think that humans share a direct lineage with chimpanzees, reptiles are related to birds, and even that whales & dolphins definitely AREN’T related to fish! 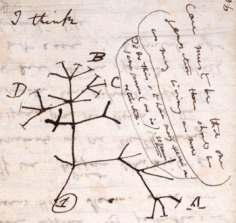 Darwin’s first sketch of a ‘tree of life’ from his notebook on board the Beagle.

Ever since Charles Darwin had his famous light bulb moment, and scribbled out a little branched diagram next to the words “I think”, scientists have set about piecing together the evolutionary history of animals.

The first important step came in 1861 when ‘The Missing Link’ was discovered – Archaeopteryx, the feathered lizard. Because this was the first fossil showing an animal that had a foot in both camps (the bird family and the reptile family), it was taken as proof that evolution must be the system that gives us animals perfectly adapted to their modern-day environments.

The evolutionary story of whales goes something like this –

Pakicetus: a member of the Mesonychid family

The Ambulocetus (above) and Rodhocetus (below)

The Archaeocete: 50 million years ago

For some mysterious reason, Archaeocetes and all of the other forms of primitive whales between them and present day whales died out, leaving us with only tiny fragments of bones, fossils, and the glorious Hippopotamus, as clues about how whales got here.

Only hippos, odontocetes and mysticetes survive 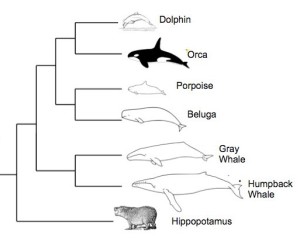 So, Hippos: They’re big and fat and they’re often found underwater. That’s pretty much where the similarity ends – but they’re actually really closely related to whales. Scientists reckon that Mesonychids (that wolf thing with hooves) evolved from a hippo-like animal back in the day… or approx. 60 million years ago. So out of all the land mammals in the world, the hippo is most closely related to the whale!

N.B. Anyone interested in finding out more on this subject can find looooads of cool stuff here and here!